December 23, 2015 Mike Poeltl 0 Comments
Snow – By Michael Poeltl
A story about the wars we waged as children, when there was snow in December, and courage found its footing in the heat of battle.
She had become a casualty of war; in less time then it took to free your hands from sweat-soaked mittens. She was an innocent; put down by a thoughtless and heartless enemy in waiting – in her own front yard. 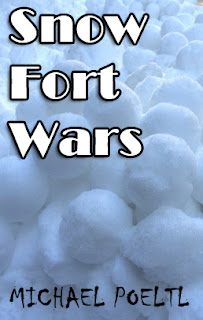 I barely made it to safety myself, the horror of witnessing my mother take hit after hit as I climbed the stairs to greet her was paralyzing. I watched it all happen in slow-motion; one in the sternum, one in the shoulder, and a final indignity finding its mark on her forehead. I froze in place – eyes set in a dead stare with hers, my mother, her body twisted like a snow fence struggling to stay upright against a powerful storm. She was sent backwards, back into the house, the plate of cookies and thermos of hot chocolate she’d been carrying collided with the icy porch. There was a thump and a yelp as she landed on the tile floor, the screen door released, slammed in front of me and I lost visual on mom.
Regret enveloped me. Had I brought this upon her? Had she taken what hammering was meant for me?
“Assassins!” I cried. My team poked their heads over the open roof of our snow fort which stood just a few feet from my position. One, then another rose their goggled heads, as snowballs screamed past. They slammed into the thick, high walls erected to protect against just such an attack. I saw my friends play out as a game of whack-a-mole in that moment; each of the six popping up and ducking down, eager to return a volley of their own, but still reluctant to catch a snowball in the head, to fall as my mother had, to the cruelty of this enemy we knew all too well.
I lunged into the relative safety of my fort. Thoughts of my mother’s sacrifice fresh in my mind.
“I see you,” I heard my mother shout from the screen door to the vagrants of ; the street thugs whose Christmas light-lined homes were not so different from our own, but whose temperament was more callous. Incredibly another snowball crashed against the brick beside the front door. Who did they think they were? She’s was an adult! Insufferable! I picked from the pile of snowballs in our arsenal and whipped one at the group, landing hard against a neighbour’s parked car on the other side of the street. A clear miss: I slunk behind our mighty walls and looked to my friends.

“They have no honour.” I told them. “They won’t just be throwing snowballs for long.”