Characters from the Post-Apocalyptic series The Judas Syndrome – Sara 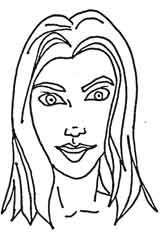 18 years old at the beginning of The Judas Syndrome, Sara is the ‘it’ girl at her high school. Beautiful, smart, athletic and engaging. Her popularity was assured, but popularity does not impress Sara, determination and purpose impress and drive her. Her choice of a best friend in Julia, a spectacled overachieving book club type, pretty in an unorthodox way, gives us an idea of her value in popularity.

She is blessed with perfect features, a main of thick shiny brown hair and the body of a cheerleader. Standing at 5’8″, Sara is taller than most of her girlfriends, but in no way uncomfortable in her own skin. The majority of her high school career Sara dates a volleyball player and though he was driven, it proved not enough for her as she yearned for more intellectual stimulation.

Sara is a family oriented person who never complains about taking family vacations or trips to the beach with her mom and dad. She cherishes her time with them. That being said, she is a teenager and happily splits from the family unit when a party or other social event involving her friends comes up. She indulges in all the illegal fun her popular friend base enjoys, but rarely to excess.

Sara is a confident girl, secure in her choices and thoughtful of her actions. She believes in Karma and is mindful of her spiritual nature. Raised in the Lutheran faith, Sara was baptized as a baby, confirmed as a young teenager and has carried the Christian teachings close to her heart. She believes in God, but accepts that she is human and so imperfect.

Sara heads up the cast of Rebirth, telling her story in 1st person, advancing the story from its tragic beginnings with The Judas Syndrome.

After the Apocalypse, Sara is devastated along with the others, over the monumental loss of her family to the Reapers deed. Joel would be her rock, he would be her everything. She was very happy when she heard Joel would be voted in as the groups leader and celebrated the victory with her friends. She became Joel’s religious advisor, reading him stories from the Bible every night, not sure whether to believe in anything herself anymore.

In Rebirth we find Sara taking on a leadership role herself when the house is split down the middle, Earl leading one camp and the remaining friends following Sara’s ideals. Pregnant and scared, Sara decides to flee the house which has fallen to Earl’s warped sensibilities, embarking on a journey with her son that will lead her onto a destiny forsaken by Joel.