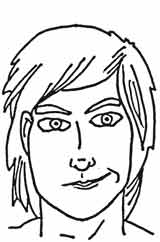 His style mirrors a favorite band, unkempt, with clean lines. Outwardly his mood reflects that of his deceased father, calm. But this calm he recognizes as little more than a mirage, his mother’s anxious nature prevalent in the back of his mind. A quiet intelligence radiates from him, he wins friends easily with little effort, a skill or trait not learned but rather something he’d been born with. He couldn’t recall a time where he made the first gesture of friendship. It went that way with girls as well. Joel had been single a total of 6 months throughout his high school career.

He finds himself the center of attention in many situations, not the least of which is making choices for his friends. He’d rather be the one making the decisions than following someone else’s anyways, and if his decisions and opinions could be projected onto his friends favorably, what’s the harm.

Joel is a compassionate person, focusing mainly on those who seemingly cannot help themselves. He feels a responsibility toward them, to help them, protect them, and is likely one of the reasons people are drawn to him.

Anxiety occasionally overwhelms him, the physical stress of it at times paralyzing him. It comes without warning, his pulse quickens, pins and needles attacking his extremities, a numbness in his face and finally the frightening certainty that death lurks around the corner. Though undiagnosed he is very aware of this flaw in himself, and manages it as best he can, alone.

Though this dark secret he carries plagues him regularly, he keeps it from his mother, not to worry her, keeps it from his doctor and friends and buries it deep within himself, controlling the outbursts by self medicating with drugs and alcohol. Careful not to become dependent on the lifestyle, he practices deep breathing and daydreaming to calm the symptoms.

Regardless of the loss of his father and his anxiety disorder, Joel is a remarkably active and vibrant person, enjoying life as it comes and where it lulls, making something from nothing. He has never allowed his dark side to completely overwhelm his life, his motto, ‘shit happens, when you get a lemon, make lemonade’ has served him well through his high school career, and he is ever hopeful it will serve him well into adulthood.