Book Trilogies End. But Sometimes the Author will Revisit it in a Short Story

July 23, 2015 Mike Poeltl 0 Comments
Life, spelled out in a name, is the official – ‘what happens after The Judas Syndrome Trilogy’ has been told – story.
Spoiler Alert
It’s a difficult thing to leave a trilogy alone. Some readers want to be left to ponder the character’s prospects, while others want more! This is how I imagine Fan-Fiction took off. In this story Poeltl offer a brief yet surprising look into the events following Revelation; the third book in the wildly popular post-apocalyptic trilogy; The Judas Syndrome. 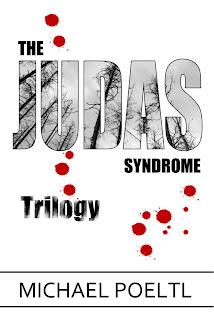 This short story stars the only character to have endured all three books – at least in Poeltl’s versions – and one of the strongest characters he’s ever written. Left with a small band of survivors, Sara contemplates her past, while hoping to prevent a future which has taken her completely by surprise.
Her son; dead and gone, and his father long dead, Sara contemplates her own mortality and what purpose she could serve in this aftermath. Upon pondering these hard questions, she is alerted that her son’s friend and prodigy; Daniel, may be in trouble as he carries on Leif’s teachings to the survivor’s of Earl’s vicious attack on their base. Homeless and hopeless, these newly displaced refugees could be capable of anything, including placing blame on her son and surviving disciples.
This short story and thirteen others unrelated to the trilogy can be found in the Waning Metaphorically anthology of short stories and flash fiction.