Short Stories and Their Relevance in Today’s Market

So I’ve been asking a few writing and publishing groups on LinkedIn about their opinion of the short story.  I wanted to research this subject before committing to a published anthology of my own shorts and flash fiction. This post will cover a few things my research has unearthed, and from it you can draw your own conclusions on the short story’s relevance.

There was a time when newspapers published serials. The greats like Charles Dickens and Poe were fond of these. Money was to be made as well! Then magazines became the popular medium to carry the short story. Buying shorts to include into a genre specific magazine was a major draw for readers.
Both have seemingly lost their punch. But the short story lives on.

Websites like Wattpad carry millions of short stories and serials from authors hoping to be discovered. No one is getting paid for these, but paying sites do still exist. Besides, writing short stories are meant to bring in an audience rather than make you money right?

Wrong. The short story is an art form. It won the Nobel Prize last year for literature. It’s not playing second fiddle to novels, and never has. In fact the short has been experiencing a renaissance of sorts recently. Even the film industry has been picking up shorts because a 500 page and up novel is much more difficult to write into a script than a 20-80 page story.

Fan fiction is a great way to enter the short story market too. I wrote a short concerning a character in my trilogy, The Judas Syndrome, which told the story as seen through her eyes after book three had ended. I wrote it in just twelve pages.

The problem with selling your short stories one by one via Amazon and Smashwords is that many self-published authors are selling their novels for $0.99, and the majority of readers look for deals. Multiple consumer studies in 2013 and 2014 confirmed that readers won’t spend the money for a short versus a full-length. So your short story, though every bit as good, if not better than a novel, only offers 20 to 80 pages of literary bliss while the novel is 200 and up.

The fix? Put your shorts and flash fiction into a collection. An anthology. Find the stories that share a common theme or genre and sell them as a package deal. Now you’re attracting the larger audience to your works.

My own collection will be available very soon, and will be found in both paperback and ebook formats, entitled: Waning Metaphorically. Follow this blog or find me on Facebook and Twitter, Goodreads, linkedIn and Google+ 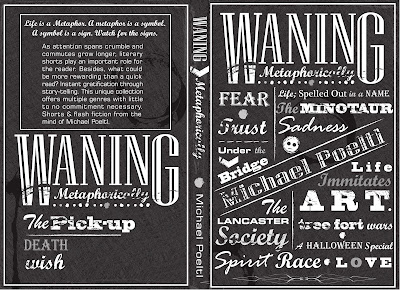