Conflux: Threat from the Troika, a military fiction novel by William Brazzel.

With the daily discord taking place worldwide, I wonder if the United Nations is up to the task of calming the numerous threats and wars that are occurring. From my vantage point, I’m skeptical that the U.N. members can maintain peace. Due to the numerous agendas maintained by the membership, I believe that their self-interests have created an atmosphere of apathy concerning issues that conflict or fall outside of their own agendas. 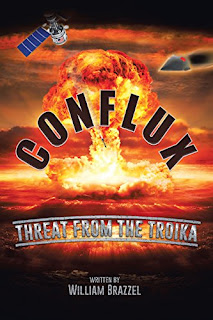 In contrast, any actions the members do take, often serve to inflame the existing conflicts without resolving the underlying issues that exist.

In addition, I believe the cost to the United States in membership dues is prohibitive. When you understand that the U.S. pays for 22% of the annual U.N. budget as compared to the nearly 8% provided by both the Republic of China and the Russian Federation combined, I become angry while realizing that our country is once again being taken advantage of. Understanding that the United States is considered a pariah nation by many of the U.N. members, I wonder why we continue to maintain our membership in such an ineffective and biased organization.

In my novel, “Conflux Threat from the Troika” the U.S. ambassador to the U.N. and her staff are discriminated against by members of many foreign governments. As a result of the overbearing discrimination and disrespect displayed toward the U.S. delegation to the U.N., the United States ultimately withdraws from the United Nations, producing panic and shock among the remaining members.

The actions taken next by the U.S. are completely unexpected and result in utter chaos worldwide.

What steps do you think our country should take in the future with regard to our membership in the U.N.?

Find out more about Bill Brazzel at http://www.scifiauthorbrazzel.com/
You can find his new book Conflux Threat from the Troika on Amazon.