Writing metaphorically is a style of story-telling which resonates with people. From the ancient world turtle story right through to modern day narratives, the metaphor has contributed deeper meaning and depth to our stories.

Many metaphorical tales have been borrowed from one generation to the next – updating the content – but maintaining the metaphor, in order to tell a similar story. The world turtle, for example, can be seen today in the new picture book, *An Angry Earth. The world turtle; based in the ancient Hindu belief that the world rode upon the back of a giant turtle could easily be seen as a metaphor that the Earth was alive. An Angry Earth then goes on to tell the story of a planet which had been abused by its people, poisoned and polluted until it had had enough, and sent earthquakes, tsunamis, floods and drought to its people. The metaphor remains the same – the earth is alive – yet the story changes to reflect a modern day problem. 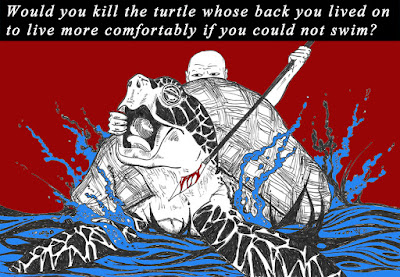 Writing in metaphor is a powerful way to embed an idea or emotion in the reader. It offers real-world drama to its audience, while forcing their minds to work on that metaphorical level of understanding which has been with us since the beginning; since we began telling stories to each other.
If nothing else, metaphors add an interesting element to the act of story-telling and should not be overlooked in any genre for their powerful ability to build depth and interest into any tale.
*An Angry Earth is a cautionary tale of ignorance and theapocalypse.