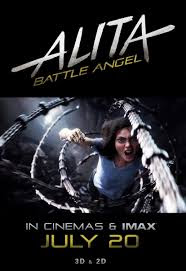 The story goes: when Alita awakens with no memory of who she is in a future world she does not recognize, she is taken in by Ido. As Alita learns to navigate her new life and the treacherous streets of Iron City, Ido tries to protect her from her mysterious history, which is glimpsed in the trailer. Her street-smart new friend Hugo offers to help trigger her memories. But it is only when the deadly and corrupt forces that run the city come after Alita that she discovers a clue to her past, she has unique fighting abilities that those in power will stop at nothing to control.
So Alita is a cyborg. An android, with a human brain.  This appears to be a serious sci-fi offering which I’m excited to see. Does it relate to AI Insurrection at all? I don’t really know. Perhaps the cyborgs could be compared to the Chimera in AI Insurrection: humans altered with tech, but not every syfy has to be comparable.
I do like the look of the film, dark and very futuristic. Should be a solid sci-fi effort if it has a story to share and not just digital FX heavy. Science fiction is a great medium to express real life concerns about the future of our world and society. I have a good feeling about this one though. Great cast. I’ll go see it for sure.
Out December 21, 2018