Bearded Authors and their Wisdom, Revealed

August 2, 2018 Mike Poeltl 0 Comments
I’m growing a beard because there is a proud and primal history of beards among authors. Joining the ranks of Ginsberg, Whitman, Hemingway and the like if only in facial hair. Though I have my doubts I’ll ever rank among these literary heavy-weights in the written word, I am determined now to meet them head on with a beard of my own. 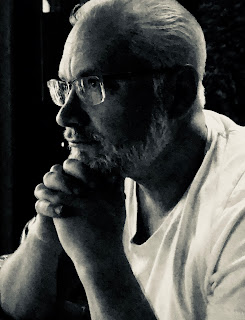 I may be only 46, but since I’d gone grey prematurely, I thought it time to mimic the great ones whose beards were as mine; the salt ‘n pepper, the silver foxes, the blue-hairs. In my twenties I wore goatees, as was the style of the day. Since those lost years I’ve sported no more facial hair than a 9 o’clock shadow.
That it is fashionable in 2018 to grow your beard gives one confidence in the process but while I do not subscribe to the Hipster movement, I find the beard a fine companion to my face. I feel somehow younger and appreciate the slimming effect a well manicured beard has on my otherwise round, Piscean face.
Do I feel smarter? No, not especially. I used to think some intellectuals grew beards as forewarning; as if to say ‘I’m wearing my brains on my face’ – and I still do in respect to the more pompous academics. All the same, I get the beard now and am enjoying the process.
As an author and artist, I have always respected those in the Arts whether they sported a beard or not but feel closer to those who did now that I wear my own. A kinship among artists. One which spans millennia and medium.

As promised in the headline I do have a list to share featuring authors and their beards with appropriate quotes therein. Enjoy.