So you’ve written your plot line. For the most part it looks complete. All you have to do now is develop characters and run them through the plot in order to end up with a story. If only it were that simple. As most authors know, once you have characters who are thinking for themselves, at various points the original plot line no longer looks like its former. The characters and even events grow as you write. New ideas along the journey of writing spark exciting developments for the story and for the characters. 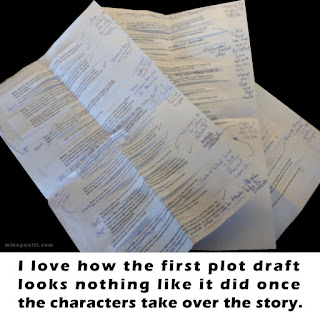 Just writing your story allows the creative juices to flow, so not to at least consider the character’s conversations in your head would be a detriment to your story.  You’ve created them, but the more you put into them the more they know themselves. Trust in their voice to carry you into the next big event. They want their story told while the larger plot is being constructed.

A first draft is never your final, and to hold yourself captive to the first draft of your plot line is silly. See where the drama fits when your character urges you to include it. Revisit your plot line often and allow scenes to build themselves. I am never disappointed in the additions made on the fly. For that purpose I intentionally leave out large chunks in my first draft to allow my artistic license to reveal itself, or that of my character’s. I’m not always sure who’s writing my stories, but I know I’m the one typing them out. I’m the vessel if nothing more.

These situations it can become trying, as often later scenes will begin to affect scenes from the beginning of your story as they develop along a different path. You will have to go back and re-read scenes so they jive with the new additions. But it’s a small price to pay for the insight you and your readers will gain into the characters driving the story. Reworking your manuscript is a fact of life anyways, and you’ll read your story a dozen or more times regardless justt o get it ready for editing.

In closing, I say let your creativity guide you once you have a plot line. Pull form the ether. Become the vessel for the story your writing, and don’t be so rigid, following the first draft to a tee. Where’s the fun in that?!