The Tree-Man of Dhalia – Short Science Fiction for Free

April 23, 2018 Mike Poeltl 0 Comments
The Tree-Man of Dhalia
It is a tree. Of that, I am immediately certain. An ancient tree with a scarcity of leaves on top, and bark thicker than my torso and chipping in places. It’s alive, but not merely in the way one might think a tree is alive. No longer sedentary – bound by its roots to the earth – this tree stands. It does not stand under its own power though, for the mechanism which lifts it must have been built by man, or alien, or something with opposable thumbs. I watch on with trepidation as a heavy arm breaks the surface with an elbow and another follows. Dirt and rock bursting upward. Both arms plant their hands on the forest floor and push, drawing itself up while rocks and critters and dirt pour out of the now deep hole where the thing rested. Dirt and dust and decay fall from its dirty tech. 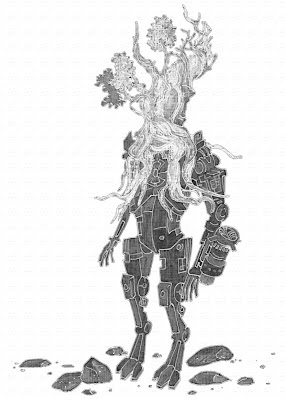 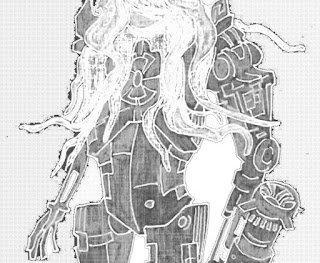 “But?” Orwell says with inference in his voice.
“Yes…” I begin to move toward my hidden comrades. Slowly. “But, we do not recognize robots as alive. Intelligent though they were, they were not life in the sense my species is alive.”
“And so, you feel you will not find in my favour either?” Orwell follows my path with his body, turning to watch me move further away.
As a scientist, I realize the great discovery a thing like Orwell is. I spin scenarios where we take down the beast and dissect it in a lab; stealing its secrets and incorporating them into our own tech. As a Botanist, I am torn to disturb this incredible lifeform in fear of destroying it before we can recreate it. A talking tree… It’s the stuff of fairy tales!
“I know you are alive, Orwell, but I do not know whether it is the tree or the mechanism doing the talking. Artificial intelligence is one thing, but a talking tree is quite another.” I turn when I am a dozen metres from the thing calling itself Orwell.
“Whether you believe what I am or not, Christopher, you will be asked to leave only once,” Orwell states in no uncertain terms. “Should you like to leave as friends, that would be preferable. As enemies, I will be the victor.”
Just a couple of meters from my landing party I need to decide how to proceed. Do I signal them to open fire? Do I motion for them to back off? “And where are your creators now, Orwell?” I ask with my back to him and my eyes scanning my group.
“As I said, they left seven-hundred years earlier. I do not know where they are.”
“Then they cannot help you if you were to face another war.”
“I would not require their help, Christopher. Are you attempting to rationalise an attack on Dahlia?”
“Not on Dahlia, Orwell. No.” I turn to face the tree giant. “Just you.” I motion with my hands to take the monster down and twelve of my armed landing party slip from the relative safety of the outlying trees and fire their pulse rifles at the beast’s chassis.
_________________________________________________________________ 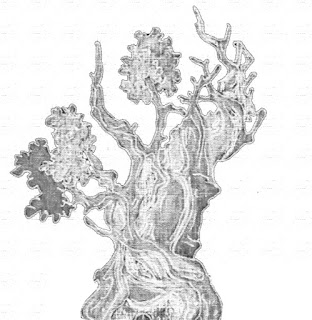 The forest speaks to us next. A network of fungus which traverses the entire jungle – the continent – beneath the forest floor, explains its intentions within a matter of moments. Orwell has returned to his place amongst the trees. I feel his presence.
“You will have what may seem an eternity within the fellowship of the trees now,” Orwell explains. “The creators do not often show such compassion to those who show such aggression. You should be honoured.”
My mind spins in every direction searching for a way out of this. My mind – I still have my mind.
“You are still sentient, Christopher,” Orwell answers my anxious thought. “This is a blessing, not a punishment. When you have had five hundred years to consider your position, perhaps then you will receive a body, as I have.”
I am a tree. I am a tree…