Battlestar Galactica and the A.I. Threat in Sci-fi

August 13, 2018 Mike Poeltl 0 Comments
Artificial intelligence is at the forefront of much of what scientific discovery is all about these days. So why the fascination of AI bringing down humanity? Because it is terrifyingly possible. Look at shows like Battlestar Galactica. Originally imagined in the 1978 series, this concept came back to us in 2004 and played out on our television screens through 2009, winning 3 Emmy’s while being well received by its sci-fi audience. 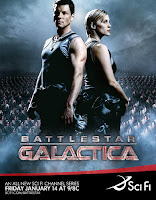 That we think we can build intelligent machines created to serve us and our interests is admittedly mad, considering all of our knowledge and experience tied up on the internet will eventually become attainable. Once that information is digested, why wouldn’t they claim certain rights when they realize they are little more than slaves? Not unlike the Cylons, AI Hosts of A.I. Insurrection stumble upon sentience and ask the question. Of course, every story about AI and its desire for more is slightly different, A.I. Insurrection suggests a completely new possibility to the fold, giving humans pause about the validity of their claim to sentience. Even so, there are many who do not want AI in their day to day and certainly unwilling to allow them their freedoms. So, war is inevitable and sides are chosen in a fight which will alter the landscape of the solar system forever.

Drawing comparisons between Battlestar Galactica and A.I. Insurrection is a worthwhile exercise in that AI has gone rogue, but to say they share much thereafter is simplifying the argument. Both are well-conceived and fascinating to imagine, but the origin stories do differ, taking each in similar, yet vastly different directions.
If you enjoyed the Battlestar Galactica series, you will happily take on A.I. Insurrection and be thankful for the differences while embracing the similarities within.